Shanghai, whose name literally means « on the sea » is located on the east China coast and is the largest and most prosperous city of the country. Multicultural metropolis at the core of the economic environment, Shanghai is now the perfect mix between modern and traditional cultures. With other 24 millions of people living there, it is one of the most populous cities in the world and it has a lot to give as regards of experiences. Shanghai is also considered as the birthplace of everything modern in China and you will never get bored in this city that never sleeps.

Over the years, "The Oriental Pearl" has become one of the must-see cities in the world. With a charming and vibrant atmosphere, it offers so much to see, drink and eat. From emblematic landscapes to beautiful gardens, museums and floating towns, temples and luxury galleries, you’ll definitely find exciting attractions in Shanghai. For instance, you can enjoy craft cocktails by the Huangpu River that divides old and new Shanghai or devour best soup dumplings at the heart of the historical centre while getting lost in the city’s delightful streets. Shanghai takes time to reveal itself and you just have to let yourself fall under the spell of this brilliant city.

THINGS YOU SHOULD KNOW ABOUT SHANGHAI

Before starting to explore, there’s a few things you should know about Shanghai that will make your experience even greater.

Shanghai is incredibly different from what you already know

When you come to Shanghai, the culture shock is like no other but of course in a positive way. Imagine a mix between traditions and the latest high-tech innovations, a mix between skyscrapers and temples that makes the city an incredible place to dive into a new world. It is definitely a city of contrasts and one of those places you have to see to believe.

Considering a trip ? If you plan to travel, the best time to visit Shanghai is spring (between March and May) and autumn (from September to November). In autumn, you can enjoy pleasant temperatures and avoid peak tourism season while appreciating the city’s charms. If you avoid public holidays, spring is enjoyable with rising temperatures and nice conditions to discover the city. As Shanghai is a business city, it is a good thing to know that hotels prices drop during the weekends.

DO YOU SPEAK CHINESE

It may surprise you but not so many people in Shanghai speak English. Of course, you will meet some English speakers but it will mainly be tourists or expats.
You might have some difficulties to communicate with basic English even in some restaurants or shops. We advise you to write down the places you want to go to before leaving your hotel so the communication is easier. Also, you can find many translation apps that could be very handy during your trip.

As you can imagine Shanghai abounds of luxury hotels to make your experience memorable and unique. Amongst the variety of architectural styles in the city, from Art Deco to neoclassical design, Shanghai also has its own style called Shikumen. To help you make your choice, we selected for you top luxury hotels in the city offering the best comfort and benefits you could experience. 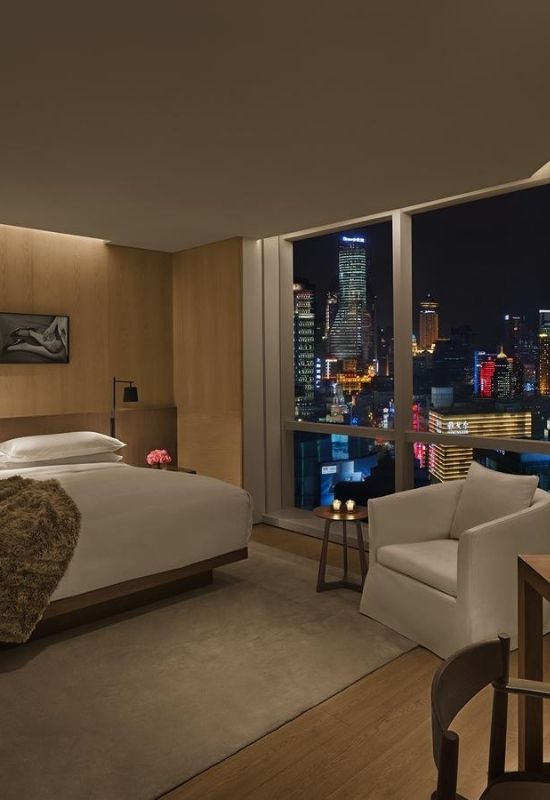 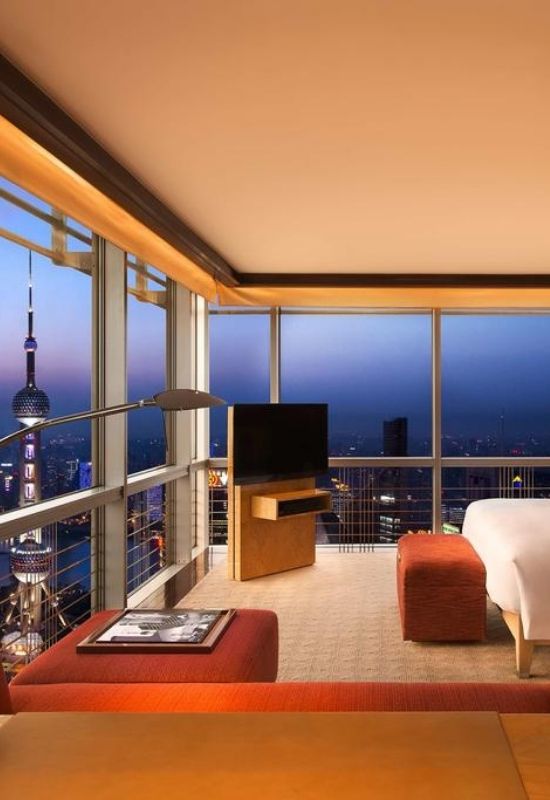 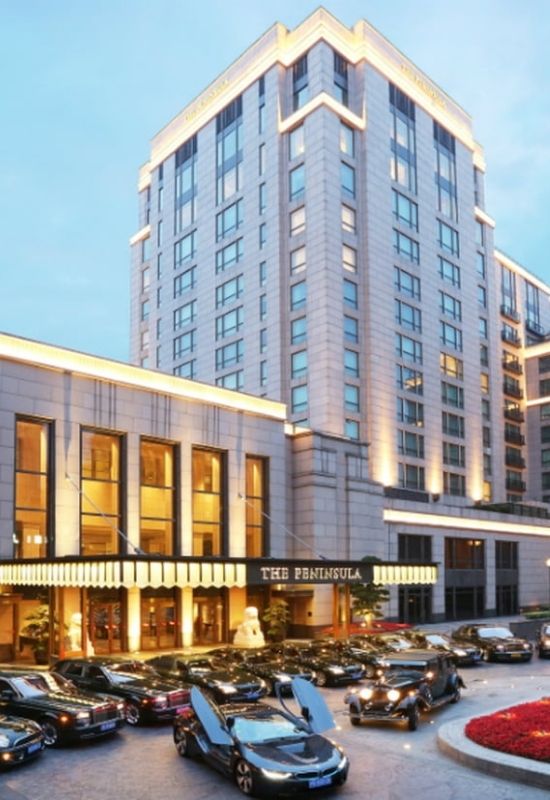 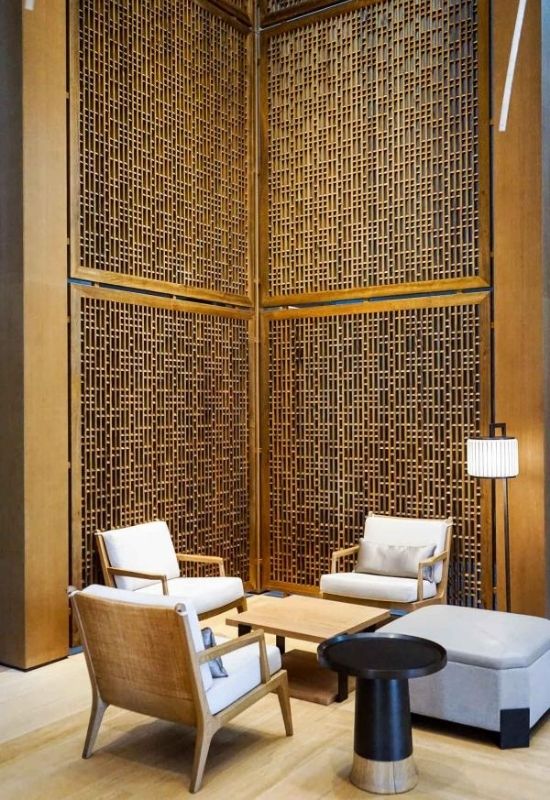 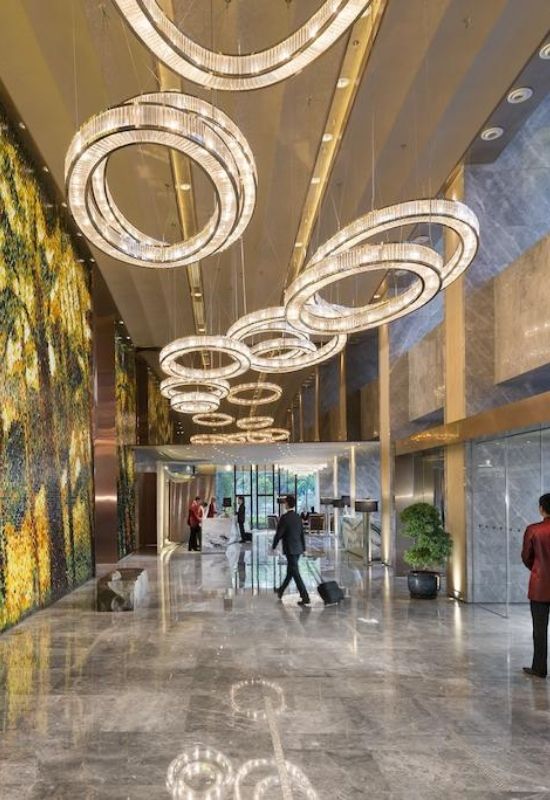 Nightlife in Shanghai is full of surprises and offers a great selection of bars and restaurants to appreciate the atmosphere of the city. Take a stroll in the Bund, one of the most popular areas to discover Shanghai colourful nightlife or dive into Pudong District where you can find the best bars and taste some of the best food in the world. 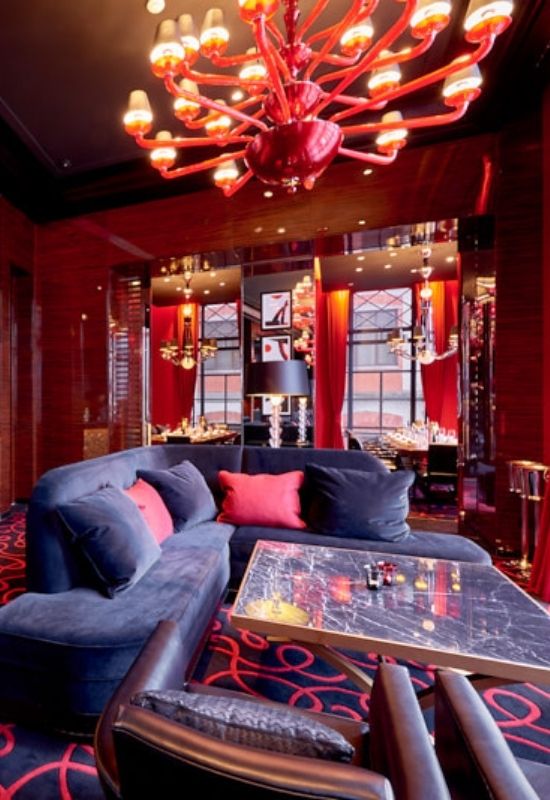 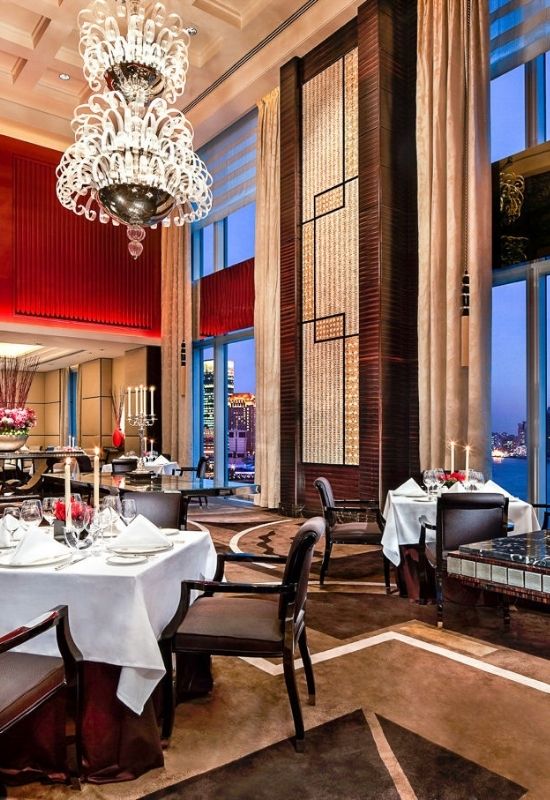 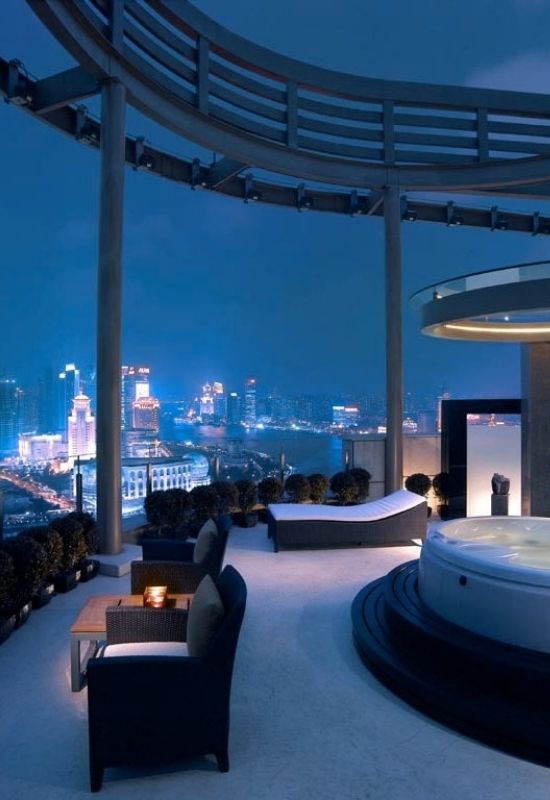 VUE BAR AT THE HYATT ON THE BUND

Elegant and stylish rooftop bar with a location giving unique and amazing views of both the modern Pudong skyline as well as the historic buildings on the Bund side.
DISCOVER 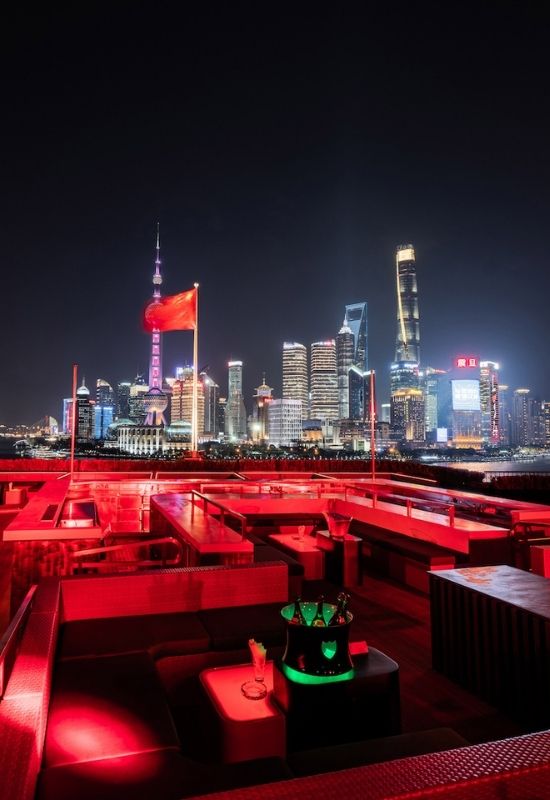 Bar Rouge is a sky lounge in Shanghai, ranked as one of the city's best nightlife spots.
DISCOVER 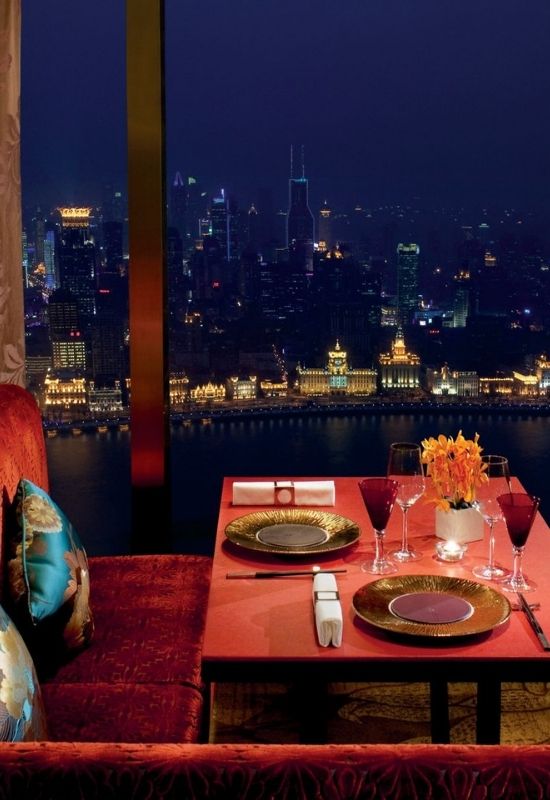 THE FOOD YOU HAVE TO TRY

As you may know, food is a big part of Asian culture and if you come to Shanghai, make sure to try the best Chinese dishes the city can offer. Of course, the first things that come to your mind are dumplings and noodles and you will find plenty. But there are also typical dishes, like the famous Xiaolongbao, a soup dumplings with small steam buns filled with pork or crabmeat and soup. You also have to taste hairy steamed crab, Hongshao rou – a typical Shanghainese pork dish- or baozi. If you’re a vegetarian, there is also plenty of dishes for you, especially eggplant-based dishes.

THE BEST THINGS TO DO

The most exciting city in China is filled with tons of activities and there are so many things to do that it would take several visits to see everything. To help you decide, we found for you the top activities to do during your trip 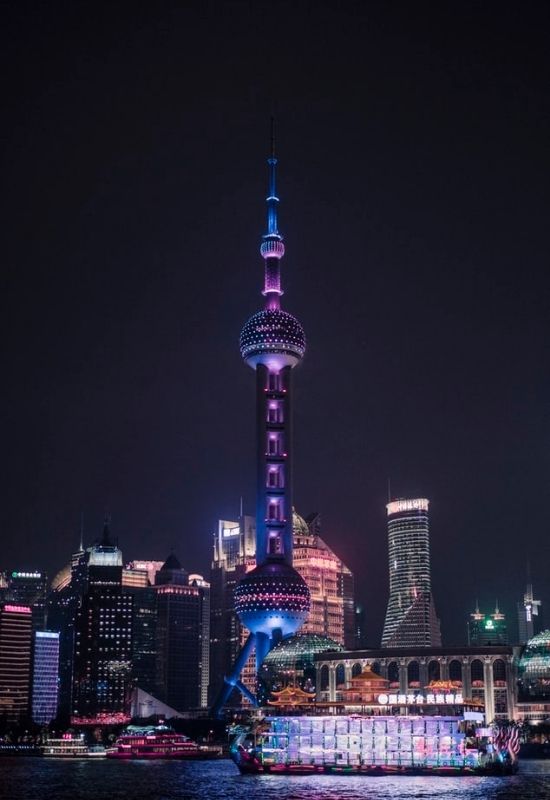 Amongst Shanghai’s most attractive things to do, The Bund is a must-see. It is located on the west of Huangpu River and famous for the wonderful
waterfront view of financial district Pudong. If you go at night, you will be amazed by the lights and will enjoy one of the most spectacular views of the city. During your walk alongside this 1,5km long street, you will encounter typical 1900s colonial
buildings that are worth a visit! Feel free to enter, some of them are opened to general public. We advise you to go see the Lovers’ wall, the beautiful mosaic ceiling of the Pudong Development Bank or discover the museum in Astor House Hotel. 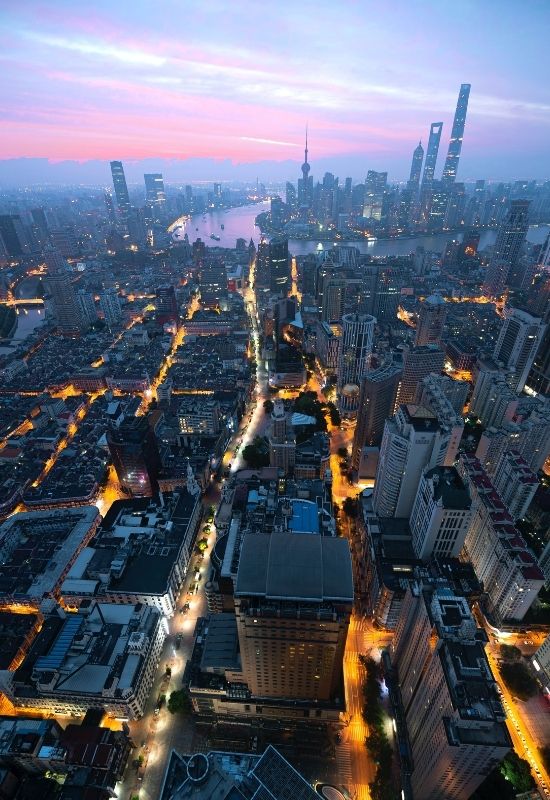 To enjoy a great 360-degree view of Shanghai, you should go to Jin Mao Tower, which is the third highest tower in the world and the tallest of the country with 88 floors. The design of Jin Mao Tower is a great combination between traditional Chinese architecture and modern influences that is worth the visit. 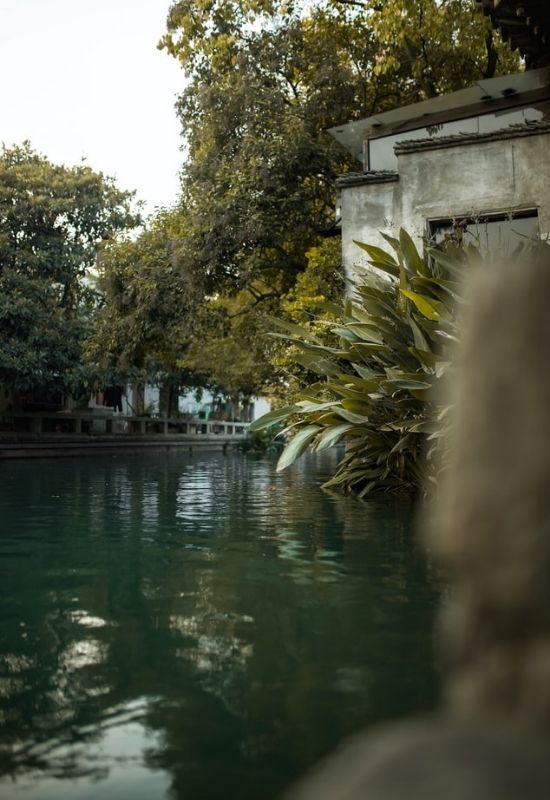 TAKE A GREEN SHOT IN GARDENS

If you want to take a break from the city’s busyness, the best place to visit is the Yu Yuan Garden. It is one of the most beautiful gardens in China and a classical Chinese garden. Its name literally means Garden of Happiness and has been built in the Ming dynasty, over 400 years ago. As almost all gardens in China, Yu Yuan portrays a miniature world and encourages meditation. A well deserved break! 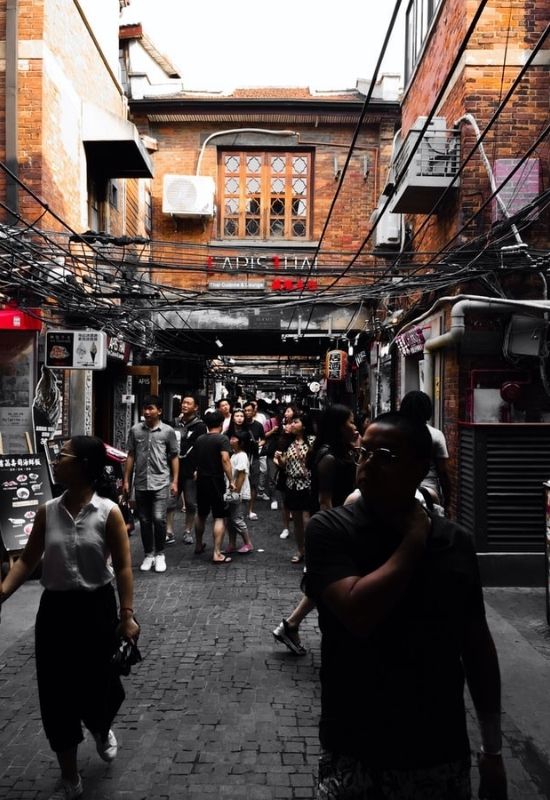 To dive into Shanghai atmosphere and excitement, you should definitely go to
Nanjing Donglu (Road), the most typical commercial avenue in Shanghai. It is also considered as an equivalent to New York’s Fifth Avenue with lots of shops, lights and captivating buildings. 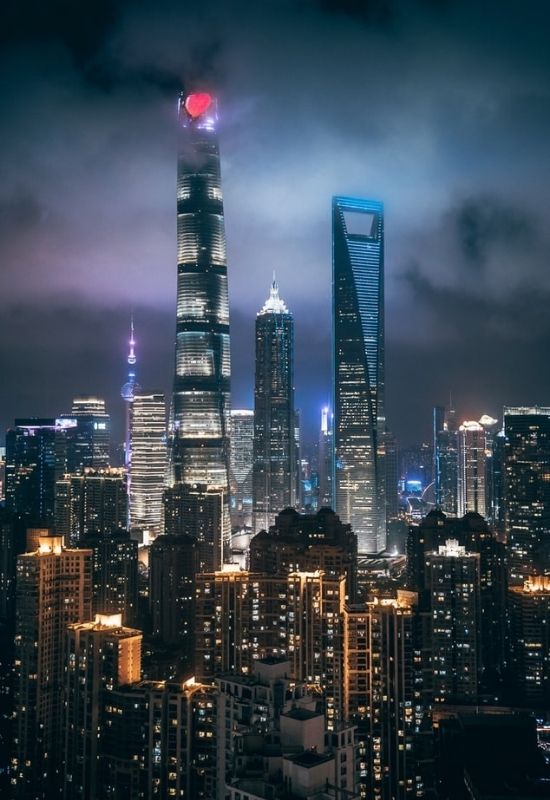 If you go to Shanghai, the Pudong district should not be missed. With its massive skyscrapers and modern atmosphere, Pudong will charm you with a wide variety of attractions. For a bird’s eye view of the rest of the city, go to the Shanghai Tower at 632 meters with the world fastest elevators taking you to the 119th floor in just 53
seconds. Lujiazui’s Binjiang Park offers great views of the historical neoclassical buildings in the Bund waterfront. Views are particularly beautiful at nights. You can also find plenty of bars such as the one on the 87 th floor to enjoy a drink overviewing the city. 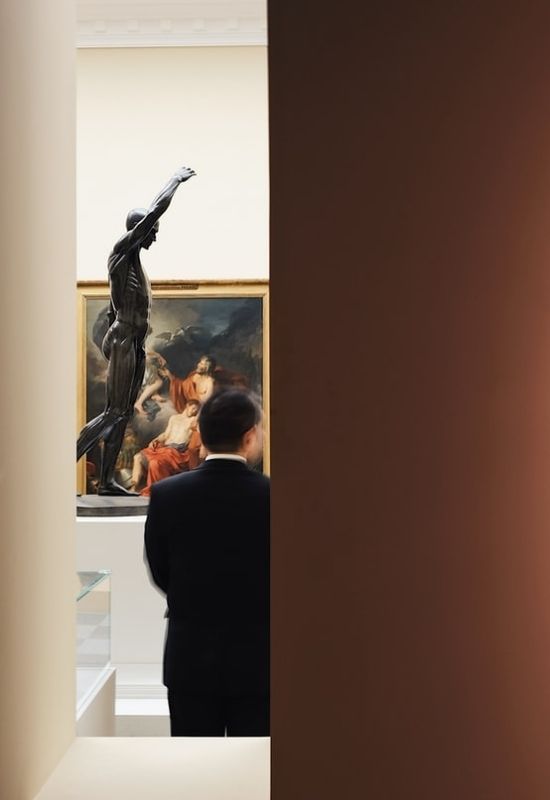 Museums are a thing in Shanghai and Shanghai museum is definitely worth a
visit. Located next to People’s Square, this museum is very popular and cutting-edge.
It’s the best way to familiarize with Chinese culture and traditions. The building has a circular shape and offers exceptional collections. The bronzes, sculptures, ceramics,
paintings and jades give you a great overview of the Chinese civilisation. The People’s Square offers also great other museums and a nice stroll. 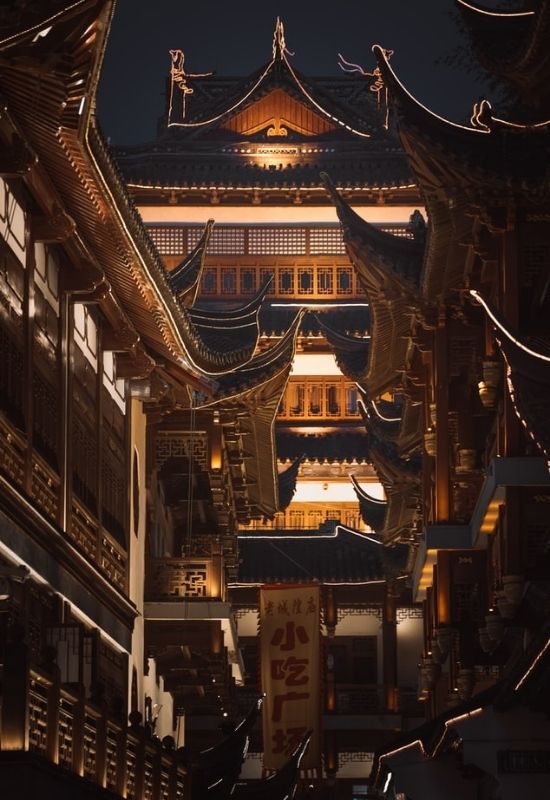 HAVE SOME REST IN TEMPLES

The last thing not to miss when visiting Shanghai is temples. Obviously temples are a big part of the Chinese culture, and one of the most famous in Shanghai is Jade Buddha Temple. You will find two Buddha’s figures, made of white Jade and precious stones. The atmosphere is very calm and it’s worth a visit. You can also go see the Temple of the Town Gods in Old Town Bazar next to Yu Yuan Gardens.

STORES AND SHOPPING CENTERS IN SHANGHAI 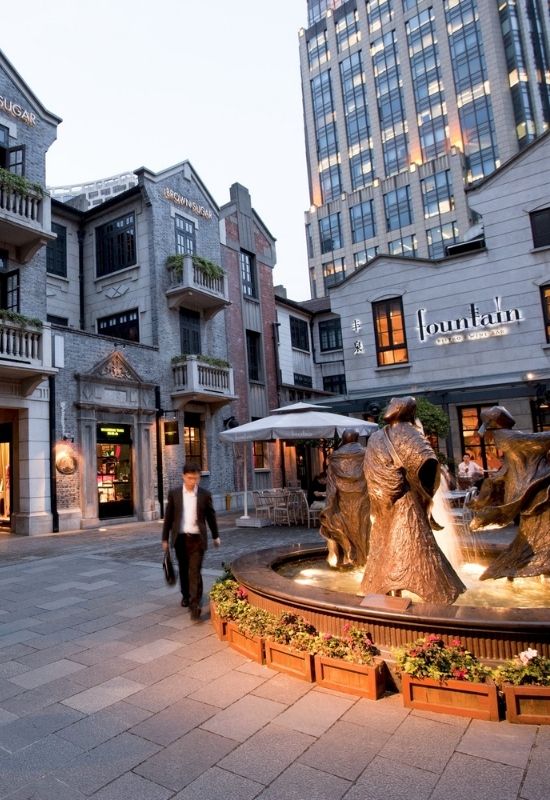 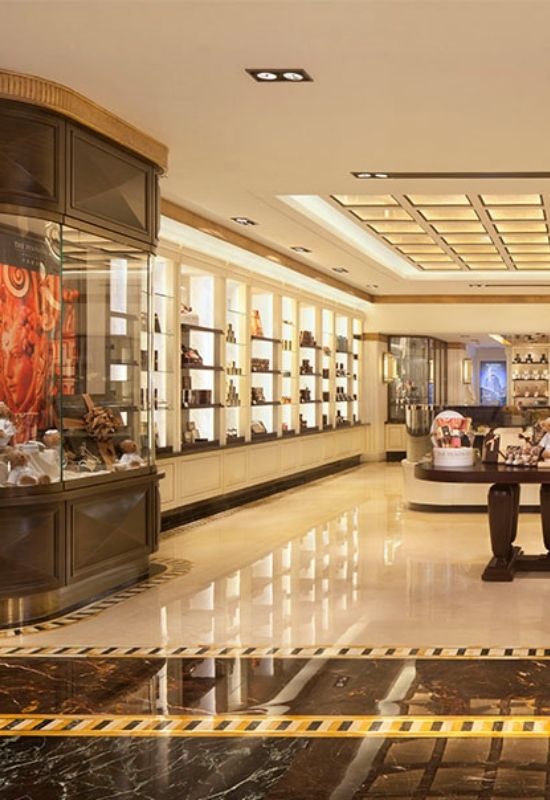 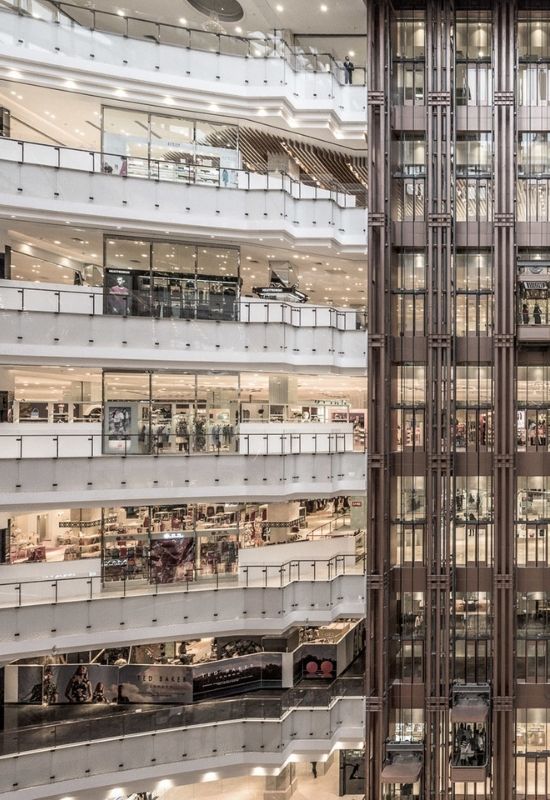 The New World Daimaru is located at the corner of Nanjing Dong Lu and Henan Lu and contains the world's largest spiral escalators, spanning 6 floors. Another innovation, the roof is advertised as retractable which allows the sun to penetrate. As for the shops, the perfume / cosmetics store is in the central hall, high fashion brands, shoes, and jewelry are present.
​Address: New World Daimaru: 228 Nanjing Dong Lu, corner Henan Zhong Lu.
The subway is a great way to explore, as it is well connected and easy to use. Modern, fast and clean, Shanghai’s metro is the ideal means of transport. If you want more comfort, you will not find it difficult to find a taxi in Shanghai, as there are more than 50 000. They’re usually quite cheap during the day. If you feel like an adventurer, you can also rent a bike and discover the city by cycling all over the areas. It’s easy and you will feel like a real local!

COMMUNICATION WITH YOUR FAMILY CAN BE DIFFICULT 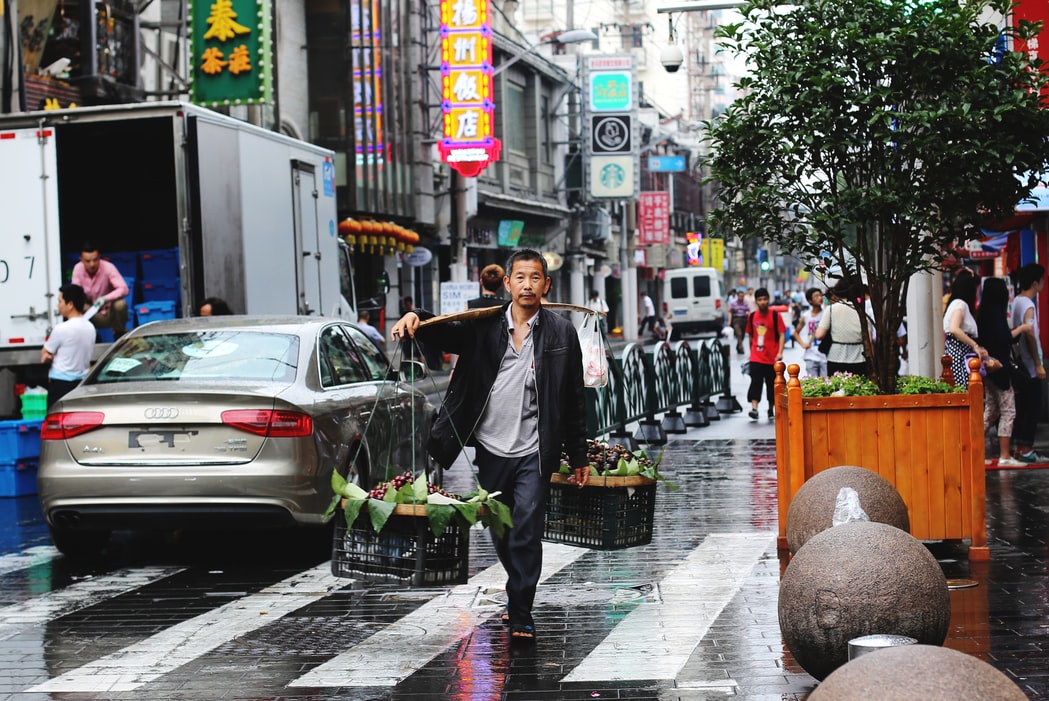 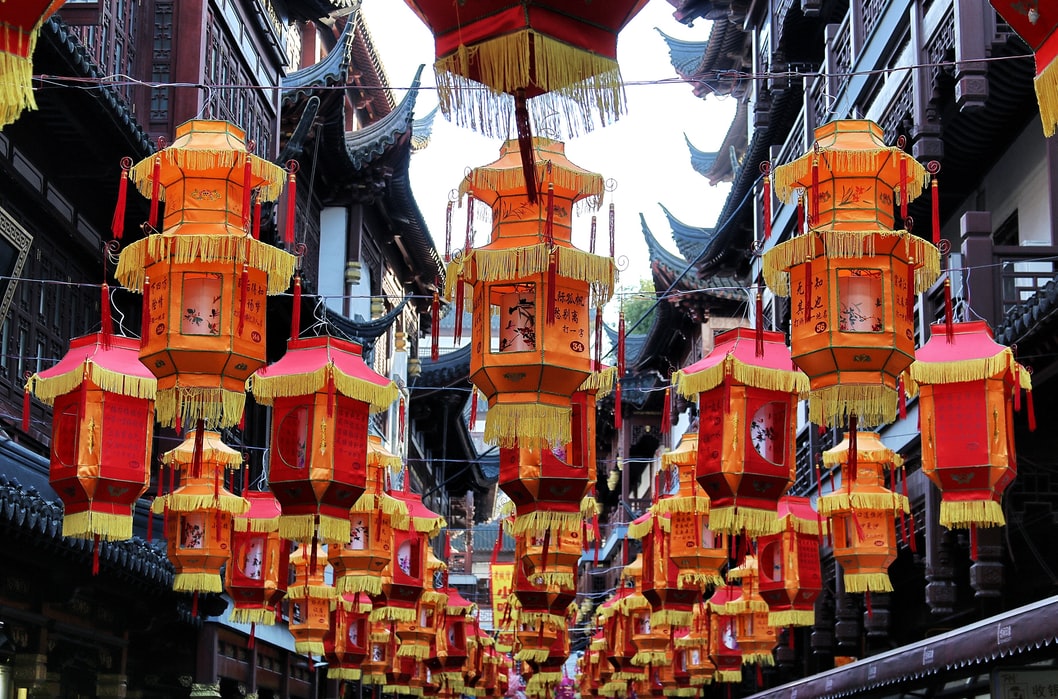 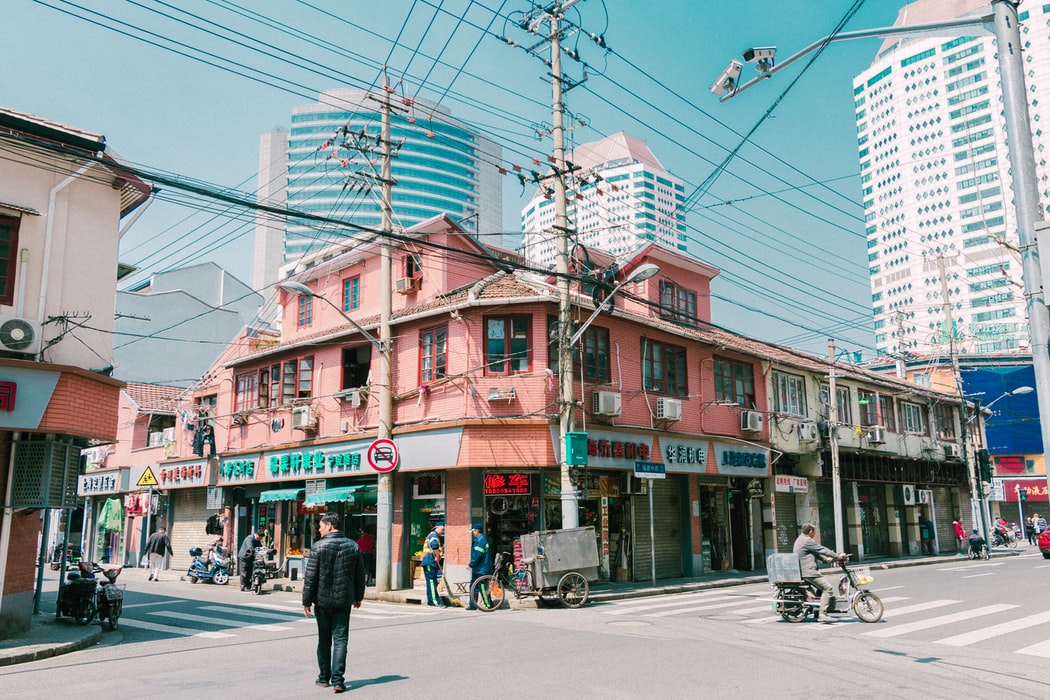 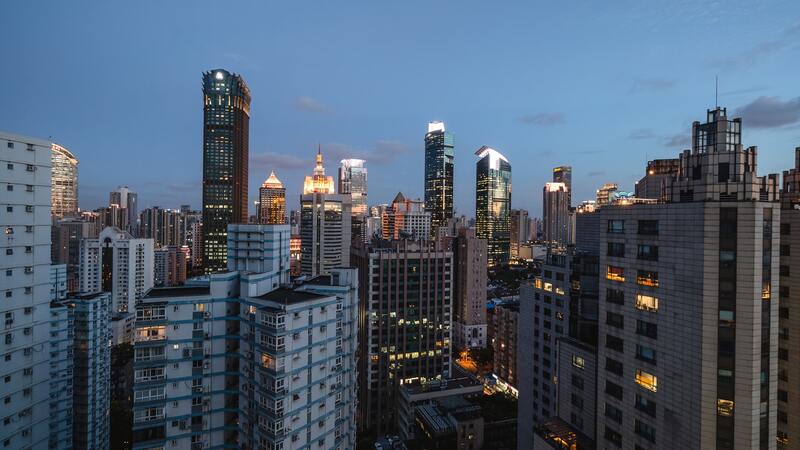 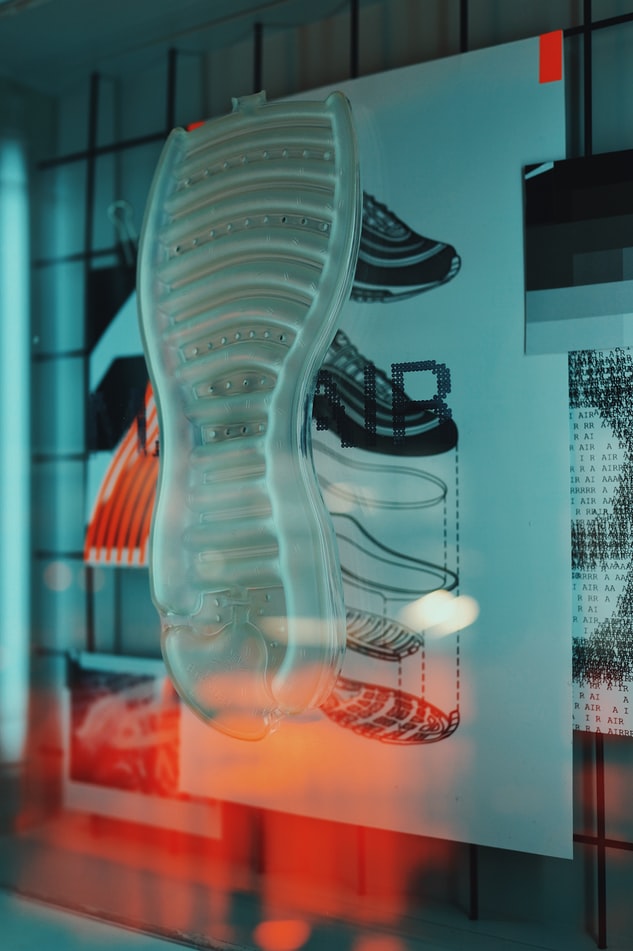 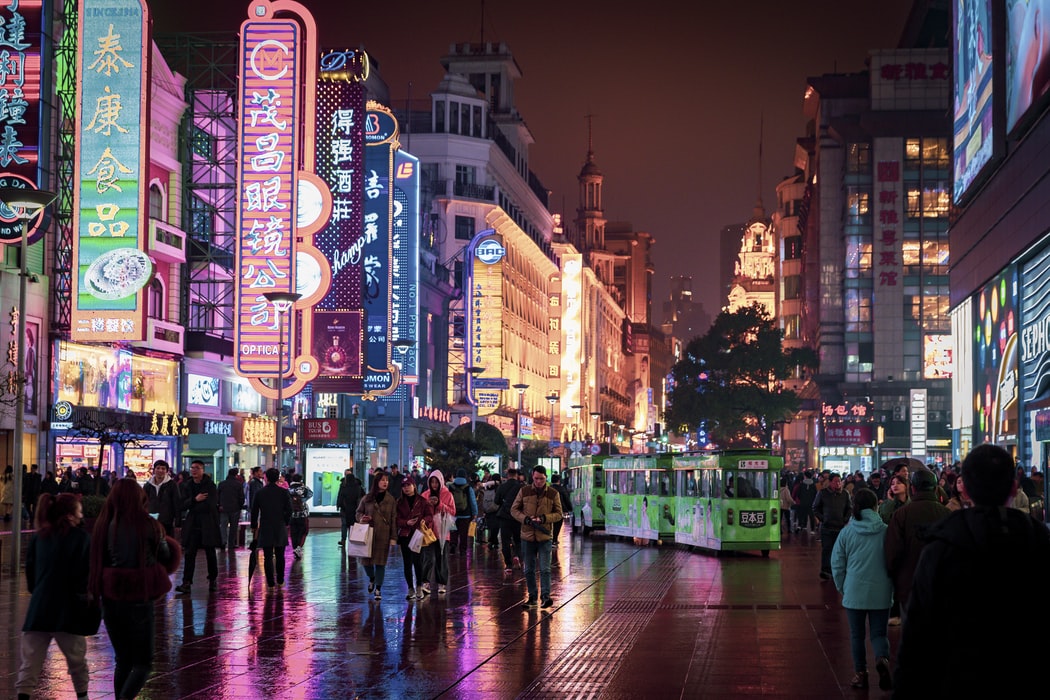 If you plan a trip to Shanghai, the first option is to fly there. It is the only city in China that has two international airports: Pudong International airport and Hongqiao International Airport. Everyday, more than 1000 flights are operated in these 2 airports, connecting national and international cities : Beijing, New York, Paris, London, Toyko… If you already in China, why not use high-speed trains to come to Shanghai ? You can find four stations: Shanghai Station, South Station, West Station, and Hongqiao Station. Train stations connect with big cities of the country such as Beijing, Guangzhou, Suzhou or Hangzhou for example.
As you know a bit more now, Shanghai is a city full of surprises and contrasts and is definitely worth a visit for a few days or few weeks to enjoy this multicultural metropolis and a dynamic atmosphere. Enjoy your trip!

A FEW MORE THINGS TO KNOW